What Have We Done? Bearing Witness

West 7th Street, Reno reflects and represents many of the contemporary issues dealing with water quality and quantity, development, sustainability, and all of the perennial concerns involving conflicts with farmers and ranchers, urban inhabitants, and Paiute points of view.  This view of Reno 7thStreet appears as if it were a (metaphoric) fort in the early West.

When my eldest daughter was three or four years old, she asked one of those questions that is both innocent and profound, rolled up into one: “Daddy,” she asked without context or provocation, “what have you done to make the world a better place?”

The answer long forgotten in the moment, is still yet taking a lifetime to fulfill.  For it’s not simple, like answering why the sky is blue, or eggs, white. The sky is not always blue, nor eggs white, nor life as predictable as our dreams may presume.

This short abbreviated excerpt from Charles Dickens’s A Tale of Two Cities encapsulates the paradox of modern times. A revolution is in the making, and it could come next week, next year, or beyond the next decade.  What this revolution may bear is still unwritten, and it is the artist, the baker, the historian, the philosopher, the scientist, and the teacher who will lead the way.  The perils of climate change, war, pestilence, intolerance, and hatred prevail, and yet the good of people shines through the smoke of chaos, every now and then, and more often than not.

Still waters prevail in the mind’s eye for someone must tell the stories. From where I stand, much of literature (and photography) presents an eloquent standard of bearing witness, even if only in hyperbole or metaphor. These stories in ceramic and stone, in silver and in pigment, in song and in memory, remain as artifacts of our efforts and of our dreams.

Within this nebula I have felt compelled to bear witness to the fact that more than 1,000 nuclear bombs have been detonated within my Nevada homeland. In 1952, Nevada Governor Charles Russell, showing his ignorance of climax ecology, said, “…we had long ago written off that terrain as wasteland, and today it’s blooming with atoms!” (Quoted in Nuclear Landscapes, 1991).

While I speak for no one but myself, I know many photographers who think of their craft as intimately involved in the evolving relationship between the artist and society – if a fire were to threaten the home, what at first thought does one take when required to evacuate? If an event compels a witness, how often are photographers nearby, even those that may not engage the craft professionally? Cellphones galore, a visual paradise of plenty – everything appears to have frozen fragments preserved in the ether of time.

Humans are engaged in this chaotic narrative, and by our telling, others may be informed, or persuaded to action, or relieved to know that after all, the Earth is still green and blue. The view of the planet from beyond our atmosphere has put a spell on us all, for alone Earth exists, in Darkness.  And therein it will remain, unless we add our voices to the growing choir of those who wish to live sustainably, respectfully, without exploiting, without greed, but in a climate of tolerance and peace, clean air and water, with neighbors not enemies, with colleagues, not contrarians.

Perhaps William Shakespeare’s quote sums this up best when he wrote, “The fault, dear Brutus, is not in our stars, But in ourselves…” [Julius Caesar (I, ii, 140-141)].  We may be victimized but we are not victims; we are capable, we can change, we can adapt, we can persevere.  We can show compassion and love, and we can seek beauty and find contentment in their continual renewal.  When the world succumbs momentarily to Darkness, the task is to find good earth and plant a tree. A photograph is like a tree in this way.

The poetic language of photography, disguised as plain prosaic fact, intrigues my visual understanding of the places that we define as ‘nature.’ Therein I can bear witness and understand the paradigms that rule our culture and generate the rules that we live by or endure.  By creating photographs such as Trinity, I offer testimony to the phenomenal dawn of the nuclear age; at this spot, at this center, in this landscape.  Stand at Ground Zero – not any ground zero, and there are now many, but the ground zero. Imagine.

Through this journey from place to place, I can wonder about landscapes through a medium of pigment and paper, of color and tone, of object and space, and light and dark.  The fundamental structure of a fort in the wilderness, a preserved prairie distractingly burned, a sacred mountain bombed, a landscape eviscerated. What have we done? Or, to quote Michael Jackson: 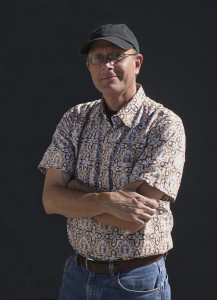 Peter’s photographs have been exhibited in more than fifty museums nationally and internationally, and he is the recipient of two National Endowment for the Arts Fellowships.  Peter’s video work has earned him an EMMY nomination as well as the Best Experimental Video Award at the 2001 New York International Film & Video Festival.  At the turn of the new century, Peter was awarded the Governor’s Millennium Award for Excellence in the Arts.

This post was shared by MAHB’s Arts Community space –an open space for MAHB members to share, discuss, and connect with artistic processes and products pushing for change. Please visit the MAHB Arts Community to share and reflect on how art can promote critical changes in behavior and systems. Please contact Erika with any questions or suggestions you have regarding the new space.

MAHB-UTS Blogs are a joint venture between the University of Technology Sydney and the Millennium Alliance for Humanity and the Biosphere. Questions should be directed to [email protected]

or
Please check your e-mail for a link to activate your account.